When designing custom lenses, development of specifications is a critical first step. Here are some of the most commonly required specifications along with an explanation of their importance.

We only take on the most challenging lenses and assemblies. We guarantee: if there’s an easier or less expensive approach, we’ll tell you. And if we can’t solve it, we’ll tell you who can.

When designing custom lenses, development of specifications is a critical first step. Here are some of the commonly required specifications along with an explanation of their importance.

The distance from the rear vertex of the last element to the image plane.

The distance from a mounting flange, which serves as a mechanical datum, to the image plane. This is not an intrinsic optical property, but is used to locate the assembly properly in the system.

The ratio of the focal length to the entrance pupil diameter. Lower values for f/# will, in general, form brighter images. If the lens is well-corrected, lower values for the f/# will form smaller spots.

A measure of how the optical power of a lens, or how strongly the lens focuses. EFL is important since the field of view of a lens, for a given sensor size at the image plane, scales inversely with the focal length.

This is the size of the semi-aperture that encompasses the image. In systems using image sensors, the x and y sizes of the image may be different, and then the distance from the axis to the corner of the sensor is commonly referred to as the image height. The image height should never be specified as zero, even if the lens is only used on axis. A non-zero image height is necessary in a design to accommodate reasonable manufacturing errors.

May be used for lenses that are not diffraction limited.

Commonly required on scan lenses, where the focused spot must stay within a given depth of focus with respect to the image plane over the given scan range.

Distortion relates to a mapping error between the object and image planes of a lens. The term can loosely be used to describe either the mapping or the deviation from the expected mapping. For example, laser scan lenses often are specified to have f-θ distortion, where the input angle is given by θ, and the output image height is given by h=fθ .

Often used for lenses used with image sensors. MTF is frequently specified as a given contrast level at one or two spatial frequencies.

The system wavelengths are typically specified in nm.  The wavelength weights are critical for optimizing the performance of the application and are relative weights to each other.

This is critical for applications where the lens is moved, as in an autofocus system.

The distance from the last physical surface of the assembly to the image plane. This is an important consideration for many objectives. 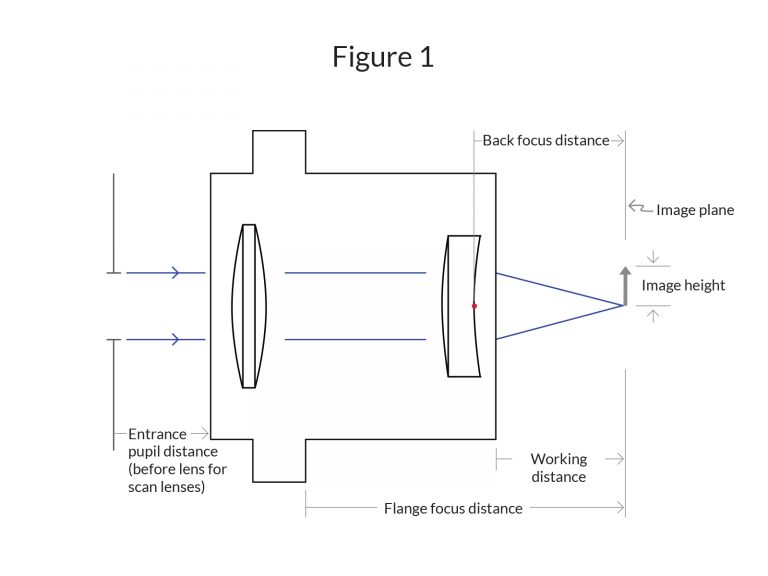 The best in the industry turn to us when they need help.